Copy of Case Referred to Division Against Discrimination 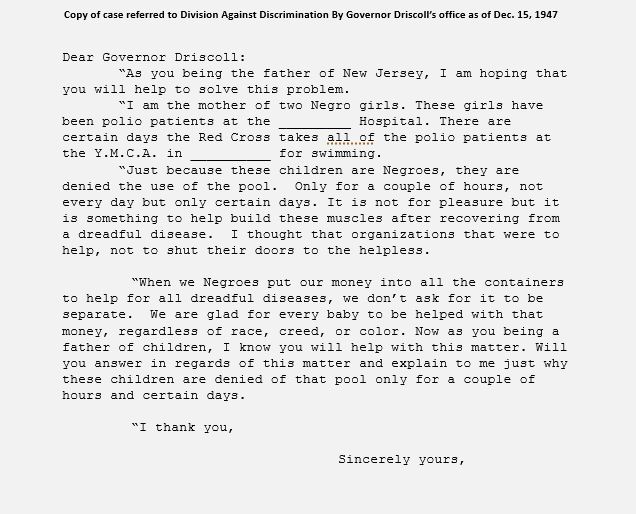 After the passage of the 13th Amendment in 1865 discrimination in public places was never codified into law in New Jersey in the way that it was in the American south and, the 1884 Act to Protect All Citizens in their Civil and Legal Rights had outlawed discrimination in "inns, public conveyances, theatres and other places of public amusement".  That doesn't mean that such discrimination didn't occur in practice in everyday life. African Americans were routinely denied the enjoyment of everyday pleasures and encountered segregation when going to the beach, buying an ice cream or attending a dance, and though it was illegal to exclude a child from any public school because of nationality, religion or color after the 1884 civil rights law was enacted "colored schools" continued to exist. Discrimination against people because of their national origin was common (especially against the Irish and Italians). The 1945 Law Against Discrimination primarily addressed discrimination in employment and it wasn't until 1949, after agitation from the NAACP, with the passage of the New Jersey Civil Rights Act (the Freeman Bill) that discrimination in social life (public accommodation) was extended, opening hotels, restaurants, and dance halls.  These laws laid the foundation for other marginalized groups within New Jersey to claim their rights to "make a living and enjoy that living".